871+-2
Museum day in Reykjavik! The breakfast at the hotel wasn’t the best but it was good enough for breakfast. The city centre in Reykjavik is quite small, so we walked. The first museum that we went to was the National Museum, I got an audio guide so I didn’t have to read everything, I could just listen and look at the artifacts on display. We had a packed lunch after the National Museum and then continued to the museum called 871+-2, yes that is actually the name. It’s called that because the first Vikings landed on Iceland in 871 C.E. plus or minus two years. We had dinner at the Icelandic Fish and Chips restaurant. I really liked the fish, it wasn’t really the same as in the United States, the fish was oven baked. Right next door was the Volcano House. The Volcano House is a gift shop with volcano stuff, but they also had a 53 minute documentary that talked about Iceland and its encounters with nature. The shows started on the hour every hour until 9:00 and the time was 8:00 after we finished dinner so we rushed into the show right before it started. The show was cool because of the videos of eruptions, but the storyteller was really repetitive. After that we went home for the night, I actually went to bed at around 11:00 because I was watching YouTube. 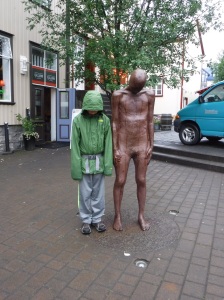 We Continue
My dad left this morning to go back home, so it’s just me and my mum now. Today we were coffee shop people, we went all over town to coffee shops where I did schoolwork and sketched, while my mum drank tea and did some other things that I didn’t notice, probably. We did go to one museum after lunch though, it was called the Saga Museum. I thought it was almost the same as the settlement center, it was also an audio tour. Dinner at a coffee shop/café called Babalú, go figure. I had a ham, cheese, and pesto panini, with a giant cookie for dessert. Babalú was famous for having board and card games, I was able to snatch some cards from the huge pack of them. We found out that none of the cards had a complete set so we played with multiple decks. We stayed there for a long time until the main waves of people came in for dinner then headed back to the guesthouse. Before we went to sleep we had to pack because tomorrow we are going to Norway!

To Norway!
We headed to Norway today! We had to get on a bus to get to the airport at 8:30 and breakfast started at eight at the hotel so we only had ten minutes to eat. The bus took about an hour and the plane left at 11:20 so we had plenty of time to get to the gate, plus the plane turned up after its boarding time, so it had to unload, get the snacks in the plane, refuel, and clean up the plane before we could get on. We actually left at 11:40. The flight was two hours so I blogged on the plane. After we got to the airport we took a bus to the city center and to our hotel. The hotel was called Scandic Bergen City and it was hard to find because there were so many other hotels with the name Scandic at the beginning. We got settled into our room and then went out for dinner at a hotdog stand😋. They were really good hotdogs. We went to bed early because we moved forward two time zones but actually we were going to bed at at good time because it was 9:00 here.

26,763 Steps
Today we did a lot of things. The breakfast opened at 6:30 so we got up early to get a head start on the tour group that was staying at the hotel also. We had intended to go on a walking tour around the old harbor where there were old fishing merchant homes, but the walking tour closed at the end of August. There was a museum close by that was one of the houses so we checked it out. It was a sort of fishing holiday today and the fishing museum was free and so was the ferry to get to it. It detailed about how the fish grew and about ‘the ultimate catch’ though it was mostly centered on younger kids. We went up the side of a mountain in a funicular, a train/cable car that was at about a 45 degree angle. We walked around up there and I got 26,763 steps in total! First dinner was at the hotdog place so we could stave off dinner for another hour. The old fish merchants buildings seemed like a cool place because they had little passageways that went between the houses. Second dinner was at a café and I had a huge serving of chili con carne. Back at the hotel my mum did laundry and prepared for the Norway in a nutshell tour tomorrow.

Transportation Day
There was a lot of transportation involved in our day. We had scheduled a tour of the area around Bergen. Waking up was hard because it was at 6:40 and we needed to pack and eat breakfast before 8:00 so we could get to our train. The train ride was from Bergen to Myrdal, it took two and a half hours and went through lots of scenic spots. We had another train that was scheduled to leave almost right after we got to the Myrdal station to Flam, but there were technical difficulties with the scheduling of it going. We had to wait for 75 minutes on the train because we didn’t know when it would leave and we didn’t want to miss it. When the problem was dealt with we left the station as soon as possible. On the way down it was really steep but scenic, at one point you could get out of the car for five minutes to take pictures of a waterfall, there was said to be a Huldra that lured people to their deaths by singing and dancing but actually I think it wasn’t true because there were two actors playing the role of the Huldra to amuse the tourists. After the train we were supposed to have an hour and a half to see Flam but since there was an hour and fifteen minute wait, it turned into ten minutes before we had to get on a ferry to go around a fjord. I was able to see what was different from Iceland. I have one word, trees. There were so many more trees than in Iceland because in Iceland there are practically none. We talked to a guy named Frank who just travels the world for a living. After the ferry we changed to a bus and after the bus we changed to a train. When we got back we went to the same café that we did last night but I had already eaten a pasta dinner so I only got a tea. We were there until the closing time at 11:00 talking to a lady called Victoria who was studying to be a teacher. When we were heading home the owner of the restaurant gave me a cupcake because they had the day off tomorrow and couldn’t sell the cupcakes after they have been on a counter for three days. I went to sleep right when we got back to the hotel.

2 thoughts on “Moving On”