Skip to content
Posted on September 29, 2015September 29, 2015 by bakuboyboom
Skagen
It was hard to sleep last night because the thumping of the engine was really loud and annoying. When we did finally get to port, we arrived early, but were not let off the boat early because the people on land were not there. The town where we moored is called Frederickshavn, it is a major shipping port. The town that we were actually staying at was called Skagen (skain) which is a small town in the off season and a big town in the tourist season. The train to Skagen was very quiet because all the kids were going the other way to get to school. When we got to Skagen, we rented bikes to ride out to the tip of a peninsula to see where two seas meet. I was not impressed by them, it was just one side of the peninsula was wavy and the other was calm, but I could see the difference in the two. After we saw the seas, we turned around and went to a church that had been destroyed except for the main tower by sand! At Old Skagen, which was nearby, we sat on a pebble beach and read our books for a while. Back in Skagen we had dinner at a bakery and we both really liked it, I had a pizza and a strawberry tart. 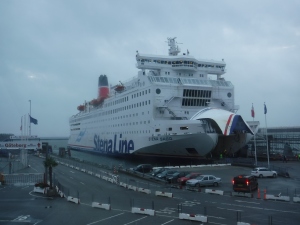 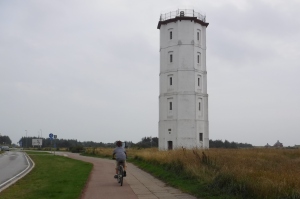 Transportation to Skanderborg
As the title implies, we did a lot of moving around today. No direct trains run from Skagen to Skanderborg, the only train from Skagen goes back to Frederickshavn. There also was no train from Frederickshavn because they were doing repairs on the track. Instead of a train we took a bus past the repair area. We thought that we had to get off the train and transfer to a different one when we got to Arhus but we didn’t have to. However, we had bought the tickets that way, so got off to purchase lunch and buy another set of tickets to get us all the way to Skanderborg. The train to Skanderborg was not long. My mum wanted to walk to get 10,000 steps. I didn’t want to because I had already gotten 10,000 steps but hey, what’s a little more walking. The walk was quite nice, we saw the city center and went into the main library! We had dinner from the food that we had bought and I blogged. 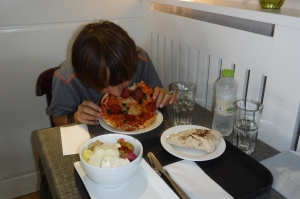 Himmelbjerget
Himmelbjerget is Denmark’s highest ‘mountain’ at around 150 meters above sea level. It is actually the second tallest point in Denmark, but the tallest point is just a little bit taller and a lot less famous. There is only one bus that goes to Himmelbjerget and it leaves at 7:30am from Skanderborg. Himmelbjerget is actually near Ry (ru), which is nine kilometers away from Skanderborg. The bus dropped us off one kilometer from Himmelbjerget and when we got there it was literally dead. There was an ice cream shop, hotel, and information center but they were all closed. The walk up to Himmelbjerget is really pathetic and took three minutes. There was no bus that came back from Himmelbjerget and we walked 10 kilometers to get back to Ry. It should have been only 7 kilometers back to Ry but the map was really confusing and we got lost twice. At Ry we had lunch in the Kvickly, an all around store and cafeteria. They had a salad bar which had a lot of things to choose from. We caught a train home from Ry and blogged at the hotel and also had dinner there. 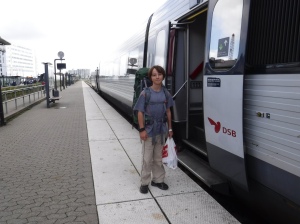 Billund
We headed in the direction of Legoland today. There was no reason to rush out of the hotel because Legoland was not open today. My mum woke up later than me so I blogged. We took the train to Vejle and then a bus to Billund. On the bus there were two people that were also going to the same hotel, the Propellen. The four of us didn’t really know where the hotel was and we searched for it together. Billund is actually a really small town in the off season and very big in the tourist season. Right beside the hotel was a swim and leisure center called Lalandia. Vivian and Svetlana were planning to go there after they dropped their stuff off at the hotel and we said we would join them. They are from Finland and Russia. Vivian is 13 and Svetlana is her mum. It was around 14:00 when we got to the hotel and their room was ready but ours was not, and we deposited our bags in a baggage room. The swimming place was really cool, when we went inside it looked like we were outside. The pool area was also really cool, they had eight slides, a wave pool, lazy river and, what my mum and Svetlana liked most, saunas. Vivian and I went on all the water slides repeatedly while our parents were lazy😜. Lalandia also was a shopping center, sports center, and restaurant area. The restaurant at the hotel cost a lot more than the places in Lalandia, and Lalandia had good food, compared to most places like it. We got our hotel room when we got back and it looks great, a lot of blue in the design. 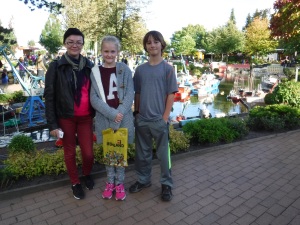 Legoland
The breakfast at the hotel was great, they had a huge variety of stuff and it was really tasty. Yesterday my mum had planned with Svetlana to go to Legoland together. They like to wake up at around 9:00 while we were up at 6:00. So at 9:15 we went down and had second breakfast with them. Legoland was also close to our hotel so we could walk there. My mum and I had electronic tickets to get in but Svetlana and Vivian had some different thing and had to go to the ticket booth. They had to wait a long time in line to get them. Using that time, my mum looked for a shirt, but didn’t find one. Legoland was REALLY cool. We went in a counter-clockwise order because most of the things for older kids were on the right side of the park. My favorite three parts of Legoland were a huge, 10,000,000 piece model X-wing. My second favorite part of Legoland was Mini Land, a city of Lego, literally. And my third favorite things were the rides, well duh😜. We purchased a bunch of mini figures at Legoland, all of series 14 (Monsters!) and some others. We had eaten a big lunch at Legoland and weren’t hungry enough to have dinner but Svetlana and Vivian came over and we had tea. When they left I was so tired I fell asleep right away. 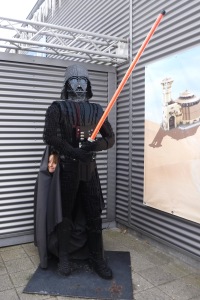