To Copenhagen
Breakfast today was very busy, probably because we got up later than we did the other day. Svetlana and Vivian were not there so we still had to come back for a second breakfast so we could talk about when we were leaving for Copenhagen. Unlike the bus coming to Billund, which came every hour, the bus to get back to the train station ran about every 20 minutes. That made life easier for us, because we just missed the bus and we thought that they left every hour until we looked at the schedule. 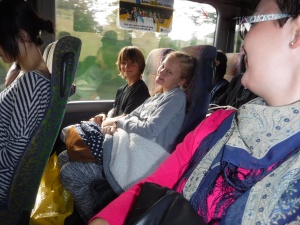 The train to Copenhagen was probably going to be pretty full and Svetlana had reserved seats for her and Vivian but we hadn’t yet. For some reason when we did get our seat reservation for the train, we still ended up sitting right across from them. My mum and I were not going all the way to Copenhagen, we were going to stop about halfway at Odense. I didn’t really want to stop at Odense because I didn’t know what we would do there, my mum however, wanted to go to the HC Anderson Museum. 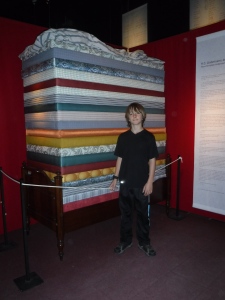 HC Anderson was an author that had his books translated into 156 different languages! I thought the exhibit wasn’t very interesting because it was almost all reading and I’m not really into him or his life. Transportation by train in Denmark and Norway is well used and is quite clean and comfortable. The train stations are well kept and it is very easy to find your way around, even if you don’t speak or read the language. Copenhagen was very different than I imagined it to be. In both Norway and Iceland the capitols were pretty quiet, and when we got to Copenhagen it was VERY loud. My favorite part about Copenhagen was where we stayed, not because the rooms were nice (they were rooms with only beds in them), but because the entrance to it was a bar. Why I liked it was not because I could drink (well, duh, I’m seven years too young) but because of the energy of the place. In the morning it was all quiet and calm, but in the evening it was all rowdy and loud. We went for a walk around our hotel and to the royal palace, which, is a big box with lots of windows on it. While we were on the walk we had dinner at a restaurant called Wok-on, a Chinese pan-fry place. 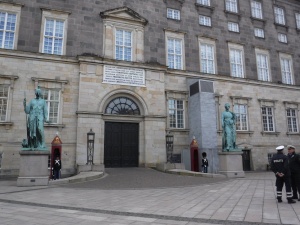 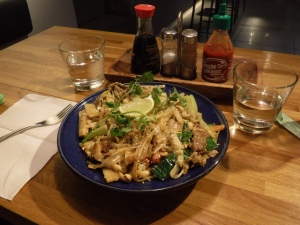 The Final Stretch
We spent the last three days – well, only two full days – of our trip in Copenhagen and we did a LOT of stuff. My favorite part of the whole time in Copenhagen would probably be Ripley’s Believe it or Not Museum. Ripley was a real man that traveled the world and looked for unbelievable things that he saw and made a TV show about all the things that he saw. We went there also with Svetlana and Vivian. One of the exhibits was about how people can do weird things with their tongues and there was a mirror there to see if you could do it. Later on in the exhibit we found out that the mirror was a one way mirror and we watched some people trying the stuff with their tongues. My second favorite ‘attraction’ that we went to was the Round Tower, a tower that you can literally drive a car up it. There was also the Little Mermaid, every tourist’s favorite picture spot. The Little Mermaid is a bronze stature that was made in ‘honor’ of HC Anderson’s story, The Little Mermaid. My mum wanted to go to Tivoli, an old style amusement park, and found we were a day late and they were closed, preparing for Halloween. A few other ‘attractions’ that we went to were the J.R.R. Tolkien exhibit, the ruins of the 4 palaces under the existing palace, and the National Museum. We found a very good coffee and tea shop and went there twice to work on our blogs. The last notable thing that we did before we went home was take a boat tour though the canals of Copenhagen, I really liked it and it helped me clarify some of the history of the city. The day that we headed home from Denmark was a LONG one, we got up at 5:00 didn’t have breakfast, walked to the metro, got on the plane one hour later flew to Oslo, had a two hour layover, had a 10 hour flight to Oakland, took the BART, had dinner out, and finally, got home. 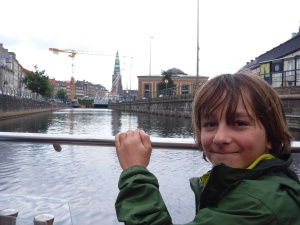 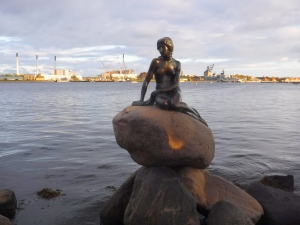